Guard Rodney McGruder could prove to be yet another steal for the Miami Heat from what has been so far a depleted season for the team.  Injuries from here to there have done nothing but hindered Miami’s progress.  Dwyane Wade and the Chicago Bulls decimated the fatigued Heat not too long ago, who were missing Justise Winslow, Dion Waiters, and Josh Richardson.  Waiters and Winslow still have not seen the floor.  Replacing those minutes, for the time being, has been McGruder.

Rodney McGruder was an absolute stud this past year in his run with the Sioux Fall Skyforce, the Miami Heat’s D-League affiliate team.  The 6-5, 205 lb guard averaged 15.8 points, 5.3 rebounds, 2.3 assists and 1.4 steals.  He also shot a commendable 51.3% from the field and 38.4% from three-point range.  To top it off, he was instrumental in helping the Skyforce not only notch an NBA D-League record of 40 total wins (McGruder appeared in 48 games and started in 44 of them), the team was also able to win its first NBA D-League championship (the FIRST in franchise history).

“I think Rodney McGruder is the most underrated player in the D-League…He’s been the rock of this team.  He’s been Mr. Consistent.  The players know it, the staff knows it, we know when he gets out on the court, we know what he brings every night.  I believe he’s an NBA player.”

It’s difficult to imagine that a guy who came out of Kansas State as First-team All-Big 12 in 2013, averaged 15 points and 1.3 steals a game went undrafted in the 2013 NBA Draft.  He signed with the Oklahoma City Thunder in September of that year but was waived shortly afterward.  He bounced around Hungary and transitioned back into the NBA.  He had a short stint with the Boston Celtics and then fell to the D-League where he played for the Maine Red Claws.  He then was waived by Maine in March of 2015 and picked up by the Sioux Falls Skyforce where he stayed for two seasons and brought a title to that franchise.  Now he’s an NBA Starter with the Miami Heat.

“You don’t necessarily see his impact from a box score.  He does a lot of little things.”

Spoelstra even went on to say he has Winslow-like qualities.

In his debut for the Miami Heat in the Orlando Summer League, he shot 53% percent from the field and 43% from deep.  While doing this he documented 10 points a game while averaged 1.25 steals.

McGruder is a good shooter, impactful defender and is sneaky athletic.  He has a knack for disrupting passing lanes.  He also demonstrated in his tenure with the Skyforce that he can grab the board and run the fast break.  He has the potential to turn into a capable guard in this league.

In his first few games as a Starter for the Miami Heat, he’s averaged 7 points, 4.8 rebounds, and 1 steal.  However, even these are not astounding numbers, he’s averaged 33 total minutes for the past 10 games.  This means he is heavily used in the lineup.  Those minutes are equal to the team leaders in Goran Dragic and the NBA’s leading rebounder (14 rebounds per game) in Hassan Whiteside.  With a few years of development, Miami can definitely reap the benefits of believing in McGruder.

McGruder isn’t the first hopeful Miami has selected out of Kansas State.  Remember who else Miami put all their eggs into back in 2008?  That’s right, Michael Beasley was taken by Miami as the second overall pick in the 2008 NBA Draft.  Who could blame the Heat?  If you watched Beasley at K-State, he looked poised to become one of the top left-handed players in NBA history. He was supposed to be up there with Chris Mullin, Chris Bosh, or even Jed Jacobhson.  He just never lived up to the hype.  I’m not saying he wasn’t good, but he never became what the Heat expected him to be.  You wonder if he had some words of advice for the 25-year-old McGruder, who just happened to play on the same AAU team as Beasley back in Washington DC. 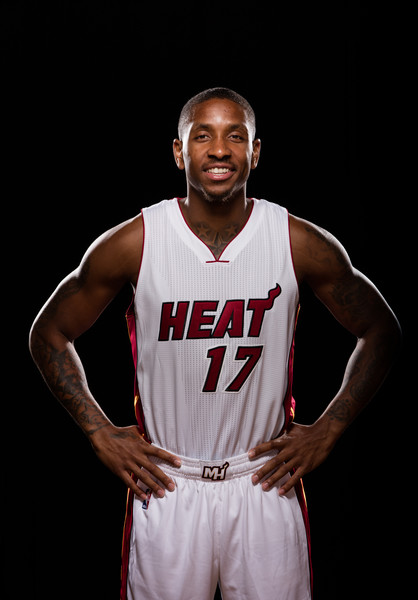