Already after one game, one can see this will be a different Chicago Bulls team than what we saw under coach Tom Thibodeau.

Chicago hoisted 39 trey attempts, making 13 in its first game against the Milwaukee Bucks the other night, winning that contest, 105-95.

Many of the starters did not play in the game. Derrick Rose, out with a fracture in the orbital bone above his left eye is home. About the only physical activity he can do is walk around his apartment.  Taj Gibson is resting his ankle which had surgery over the summer. Pau Gasol and Kirk Hinrick also missed the game.  However, Chicago had plenty of players to step in. Doug McDermott saw a lot of playing time, and flashed his deadly three-point shot in the second half. Nikola Mirotic saw action as did backup guard, E’Twan Moore. Jimmy Butler was on hand. You can’t really tell too much from one game. 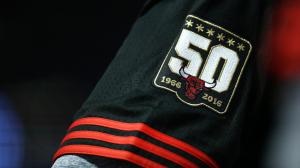 Tonight the Bulls play their 2nd preseason tilt of the season, and more will be revealed. It does look like Rose will be able to play on opening night at the end of the month.  It is going to take a while for players to get used to the patterns, cuts, and tendencies in the new offense, that new coach Fred Hoiberg has installed.

It is safe to say, this team has firepower and this offense is geared to having players maximize their talents.  Hoiberg is not going to discourage the three-point shot. “If they’re open and they have good looks, yeah,” he said during his first post-game presser.

It looks there is a much greater emphasis on offense than on defense. Hoiberg has mentioned that the team has a foundation with Thibs as the ex-head coach.

The Bulls await guys getting healthy, and Rose again in one of the ones who is recovering from surgery.  Team coaches have kept him in the loop as to what changes are being implemented on the court. But he has to get his legs and find out for himself. That won’t happen for another two weeks.