Skip to content
When someone says the Atlanta Hawks what does one think of? Just 3 Months earlier one’s answer might have been completely different. Or maybe its still the same. The mantra of the Hawks for almost a decade now has been a team who can win in the regular season but not pose a threat in the post-season.  There could be many reasons as to why the Hawks couldn’t get over the hump in past seasons. One could be facing the “Big 4” of the Celtics in the first round in 2008. Could it be facing King James in 2009 and the NBA MVP Derrick Rose in 2011?  The truth is the Hawks just weren’t good enough.

Coming into this season many people had the Hawks as a Lower seed in the playoffs or maybe not in it at all. They had a relatively quiet Off Season by NBA means. The Players the Hawks picked up plugged some holes. One great signing has been Guard/Forward Kent Bazemore who is a great wing player who can guard the Point guard through SF position. He’s a 6’5 player with a 6’11 wing span and has a non-stop motor. Another signing for the Hawks was previous Starting Shooting Guard Thabo Sefolosha. One of the best wing defenders in the league, Sefolosha helps out an area where the Hawks struggled last year.

The signings were key for the team’s success for this season, but I bet you’re wondering why the Hawks starting 5 is having so much success. The main thing is ball movement. The ball is always moving in this offense and the system has the right players. The head of the show is All-Star PG Jeff Teague. One of the quickest players in the league with great vision, Teague has put it all together this season as he’s improved in every major category. Improving on defense was another goal Teague worked on during the off season and has became a very pesky player on that end.  One beneficiary of Teague passes is Kyle Korver who was also named an All Star.  Korver is not only having his best season but he’s having one of the best shooting seasons of all time.  Currently he’s on pace to accomplish the first 50-50-90 (50% FG, 50% 3P, 90% FT) in NBA history.

The biggest key to the Hawks however has been getting big man Al Horford back from a pectoral injury that sidelined him for the last four months of the 2013-2014 campaign including the playoffs. With Horford and his Front Court mate Paul Millsap playing at all-star form the Hawks should be a scary team to face in the Playoffs. The one player I didn’t mention was the Hawks SF Demaree Carroll who is the grit of the starting unit. He’s a player that will do anything to get a W.  It’s a reason  he’s called the “Junkyard Dog. Carroll rounds out the core who has guided the team to their highest win total at the all star break in franchise history. 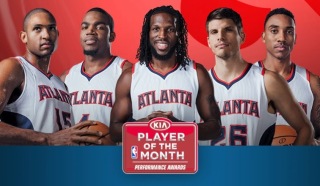 So when someone says the Atlanta Hawks what do you think? You don’t have to answer now because there’s plenty of games that are left to be played, but take a moment to realize the history this team is making due to a 19 game winning streak which included a 17-0 record for January.  The January success of the franchise led to the entire starting five being named the NBA’s Players of the Month, a first in the history of the honor.  With that being said the real focus with the Hawks will be on how they perform in the post-season.

Postseason…….Postseason is a touchy word in Atlanta. Hearing that around here can give you a few reactions. Maybe laughter, Possibly anger, or you might hear despair in the voices of the Atlanta fans. The last major sports championship for the city was won by the Atlanta Braves in 1995. The Hawks however have never won a ring since they relocated from St. Louis in 1968. This team is bringing hope back to this city, and with that hope they also bring a certain buzz. More and more people are talking about the team. A championship to this city will mean so much. This city has suffered through so many bad teams and bad years and Atlantans deserve that championship feeling.  If the Hawks reach the pinnacle they will have the entire city celebrating with them, reveling in and sharing the moment.