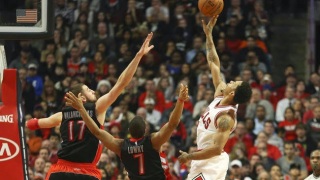 Derrick Rose was back in the lineup and Chicago felt the comfort level, scoring 49 fourth quarter points to storm past the Toronto Raptors, the East’s top team to date (22-8).  Home is starting to look like “home sweet home” as the Bulls won their 3rd home game in a row to move to 6 wins for the season.  Rose led 7 Bulls in double figures as he tallied 29 points on 12-19 attempts from the field.

The Raptors had won 6 games in a row, all without their top player, G DeMar DeRozen, out with an injury. Kyle Lowry again sparkled for the Raptors, scoring a game high 34 points.

Chicago and Toronto played a taut game for most of 3 quarters, but the Bulls pulled slowly ahead in the third with a 5 point lead. Then the floodgates opened and 49 points were scored in 12 minutes. Sometimes last season, it would take until the third quarter until Chicago had 49 points.

When they are clicking, the Bulls can score points.  Aaron Brooks scored 17 in a reserve role.  Pau Gasol, had 14 to go with 9 rebounds.  Joakim Noah had 14 points and F Nikola Mirotic added 12 points.

Jimmy Butler continues to impress and is making a name for himself in the League. He is an emerging star now, playing 40 minutes a game, doing it all.  His coach, Tom Thibodeau, is singing his praises almost nightly.  “He’s playing terrific,” “Thibs” said of Butler.

When Rose plays well, The Bulls play well.  They are well over .500 with him in as point-guard.  He apparently is finding is scoring touch.  His knees are holding up. If he is healthy, the Bulls will make some noise this season.