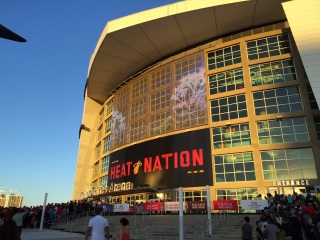 People come and go in life, co-workers, friends, and even at times family.  A revolving door of personalities, temperaments and ideologies is at our fingertips every day, minute

, and second of our lives.  It builds fortitude, a sense of one’s self and also resilience.  A resilience that is often born from betrayal, fraudulent feelings, and loss of loved ones.  A Nation can often rise from the depths of despair, the agony of defeat, the death of a dream, and the betrayal of those who were once most loyal.  A Nation is a strong force, united by a singular goal, sheltered from outsiders and non believers all the while blindly following one another to the often elusive promised land.

Make no mistake about it, the four year dream died when a certain freed slave ran back to his longtime master the first chance that he could but left buried in his wake of destruction were the seeds, the seeds of something bigger than even he can imagine, a franchise that is not about one player, one savior but one of many.  The names are all familiar, Glen Rice, Alonzo Mourning, Tim Hardaway, Brian Grant, Dwyane Wade, Udonis Haslem, and Shaquille O’Neal.  In the very near future the likes of a Bosh and a Chalmers will be added to the mix, great players who sacrificed for an even greater franchise, one who’s won three NBA Championships in a span of 8 years.  A franchise where the name on the front of the jersey is more important than that on the back…..the way it should be.

The Miami Heat is a proud organization and one with the bigger picture in mind at all times.  Despite their current record of 11-13 there is light at the end of the tunnel.  Winning a championship in sports is one of the hardest feats to accomplish but once the equation has been mastered, success becomes a habit.  Winning titles become second nature and its genesis begins

at the ownership level and trickles down with sacrifices made at each pay grade.  This Nation has its roots planted deep, a championship culture that took years to build, years of blood sweat and tears, years of disappointment that again formulated the wall of strength of resilience.

The sounds, sights and championship history all remain the same but there’s a genuine realness that has returned to the kingdom that was once led by a false prophet.  As the team is introduced there’s a sense of appreciation from its Nation that has never been felt before.  Gone are the fans that blow with the winds of success, fans that have no roots, those who’d rather enjoy the hollow sense of victory versus the euphoria of the hard journey, the proverbial road less travel.

Walking through the championship halls reminds one of days past but also of tomorrow’s promise.  This franchise is not done yet, it’s the opposite.  The seeds that were left are now beginning

to grow living off of the love and passion from the Nation that nurtures them, cheer them, and most importantly grow with them.  Be proud of the franchise before you for what they’ve accomplished in the past and for all they will accomplish in the very near future.

The Miami Heat are one of the most successful championship franchises in the history of the NBA and as stated previously, once the championship equation has been solved, many more will follow.  Enjoy this journey that has started anew

.  Laugh, cry and finally rejoice.  And as the franchises’ greatest son once said, “You are with family, you are home.”