Skip to content
The Chicago Bulls (3-1) pulled away from the win-less Orlando Magic (0-4) in the 4th quarter to win a home game 98-90, Tuesday night.. Derrick Rose was pulled from the starting lineup before the game.  He is recovering from spraining his ankles during the Cleveland game on October 31st.  Joakim Noah was out due to flu-like symptoms and he is not expected to play in Milwaukee on Wednesday.

Chicago hasn’t played with its full roster since the season started. Jimmy Butler has returned from missing two games from a sprained thumb.  Butler led the Bulls with a strong effort against the Magic, scoring 21 points.  Pau Gasol had another solid game, scoring 16 points and grabbing 13 rebounds. Taj Gibson scored 16 points. Doug McDermott scored 12 points coming off the bench.  Aaron Brooks chipped in with 13 points.

Rose spoke before the game about his injury. “There’s nothing I can do about it,” he said. “I came down on some body’s foot.”  He said he does see “improvement.” Right now, his status is best summed up as “day to day.”

Chicago’s bench has been tested. Gibson is seeing major minutes after missing time after his ankle injury. And, Aaron Brooks has made key contributions. 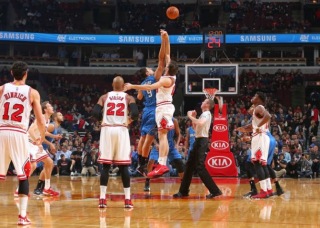