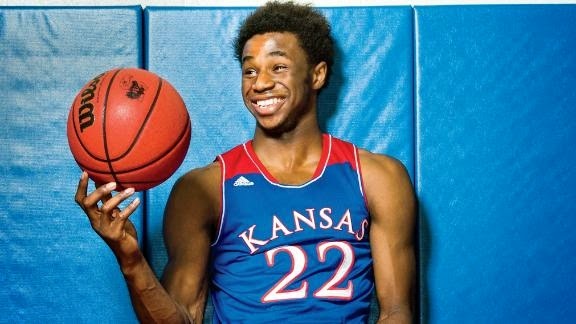 You’ve heard about him since last summer as he was thought of as the next big thing since Miami Heat forward LeBron James and even gained comparisons to him. This teenager is hands down the most hyped up  player since James was in high school but the only difference between the two is that this player is from Canada where basketball is becoming more and more popular by the day. You’ve seen him on ESPN magazines, Sports Illustrated etc., the player I’m talking about is of course Andrew Wiggins. Wiggins had a roller coaster freshmen season but despite that it wouldn’t hurt his draft stock.
“The hype has created a negative tone in people’s mind, because the hype made people believe he should get 22 points and 10 rebounds every night,” Kansas coach Bill Self said.
Being a player of Wiggins’ caliber, everything he did was under a microscope and nobody besides his teammates, coaches and family would commiserate for him. As we all know it’s very unfair for a teenager with gifted abilities to be ridiculed for every little thing he does on the court — it’s only going to get worse in the NBA. From his first game at KU to his last he has critiqued on everything he did; one day he’s an All-Star the next he’s a bust. Wiggins struggling and not having the dominate season many hoped was probably the best thing to happen him because he will still be a Top-5 pick and the media isn’t swarming him as they once were.
“I don’t think he has the mindset to be a natural, Michael Beasley-, Kevin Durant-guy that puts up numbers,” said Bill Self. “I don’t think that’s the way he’ll feel he can help the team the most. He’s going to have games where he does it. There’s going to be some games where he just doesn’t feel it. But he’s talented enough that he can impact the games just as much when he doesn’t feel it because he can do a little bit of everything.”
NBA scouts this season have been quite brash with Wiggins; its basically like this, one day Wiggins was the favorite child, the next he isn’t based on behavior and what he did that day. One comparison that Wiggins has to be James is the way he zoned out the media because he rarely commented on the negatives they were saying showing his maturity. Scouts have said Wiggins doesn’t “play hard”, not “motivated”, and lack of “love” for the game.
“[Wiggins] is not always playing hard and motivated,” an NBA scout said. “That scares people. That scares me a little. You need a gym rat, someone that absolutely loves it. It’s 82 games. It’s tough. Those guys are harder to win with than guys who love it.”
Watching Wiggins you can tell he has some King James characteristics as he is labeled as “Too unselfish” and being hesitant to attack the basket despite his tremendous finishing ability. When James first entered the league he had the same problem as he always passed when critics thought he wouldn’t and in his seven seasons with the Cleveland Cavaliers he has obsessed with that jumpshot more than going to the hole. Wiggins has a 44-inch vertical but didn’t use it much to his advantage and should in the NBA.
This season in his only season as a Kansas Jayhawk he averaged 17.1 points, 5.9 rebounds, 1.5 assists, 1.0 blocks, 1.2 steals while shooting 44.8% (FG%), 34.1% (3P%) and 77.5% (FT%) in 35 games while playing 32.8 minutes per game with a 116.1 offensive rating (ORtg). His best scoring performance came against West Virginia in which he scored 41 points.
Wiggins clearly didn’t assert himself well enough at KU like he was at Huntington Prep; had a 26.3% usage rating isn’t completely bad since he was on the same team as Joel Embiid and Wayne Selden as they formed a big-3 there. The thing with Wiggins is that he plays down to his lower competition and up to elite teams as some of his coaches had to sometimes find a way to motivate him making a scouts analysis on him a fact.
“Until Wiggins learns how to play hard, he’s Kansas’ third-best freshman,” said one NBA scout.
As great as Wiggins could be, he has his strengths and weaknesses like anybody else. With his video game-like athleticism as he posses a 44-inch vertical he will easily be one of the better dunkers in the league and will be acrobat when attacking the basket; he has great potential to become a scorer in the league as a first or second option. Wiggins has a 7’0″ wingspan as a 6’8″ forward/guard making him a defensive threat with potential. This season with the Jayhawks he had a 2.1 steal percentage (STL%), 3.1 block percentage (BLK%), 102.8 defensive rating (DRtg) and a 1.7 Defensive win share (DWS).Wiggins has a very tenuous frame at 200-pounds but as time goes by his body will develop. When it comes to passing he’s willing to do that with his decent court vision and his 1.5 assists don’t tell entire the story. He did progress a lot this season and like any other player he had his bad games just like his teammate Joel Embiid. 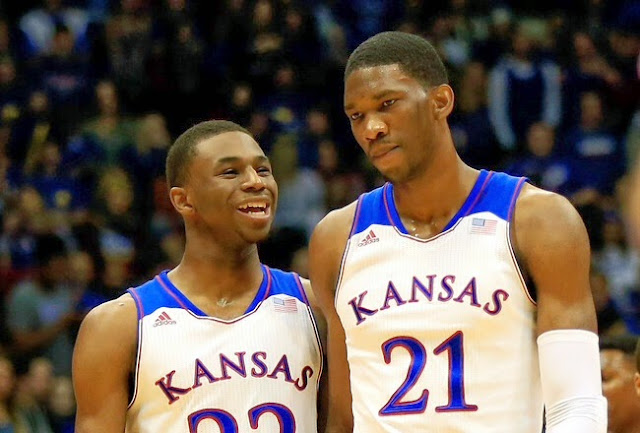 “He’s playing so much better,” one GM said. “He’s becoming aggressive. He’s playing with more poise… He’s going to have to get better at finishing around the basket in traffic, but lately he’s been playing like the Wiggins we knew in high school. I think he’s still very much in the running for the No. 1 pick. If I were choosing between him and Embiid, I don’t know what I’d do.”
A significant weakness to Wiggins is again his motor and ambition to reach the potential many believe he could achieve. Under Bill Self he wasn’t known as a physical player and he will struggle guarding small forwards at that next level just like Kevin Durant before he bulked up. He has shown signs of being a guy that can grab at least 6-7 rebounds per game. He isn’t the best ball-handler and struggles greatly against lockdown defenders. The last noticeable weaknesses for Wiggins is that he isn’t a great finisher going left and has a tendency to pick up his dribble from afar.
Wiggins has seen numerous of NBA comparisons from NBA GMs, scouts and general managers from the likes of LeBron James, Kevin Durant, Rudy Gay, Andre Iguodala etc. Name any athletic wing player and it can be guaranteed that wiggins has been compared to that player. A more realistic comparison is Andre Iguodala since both aren’t big time scorers but do share the same athleticism and similar playing styles.
“Worst-case scenario [Vince Carter].”
“I think he can be a player that plays a lot like Paul George does,” one veteran NBA executive said. “He’s so smooth that at times it almost looks like he’s coasting. But when you watch closer, you just see the game comes so easy to him. With his length and explosiveness, he’s going to be able to do whatever he wants once he gets it. And from everything we can gather in looking into his background, he’s going to get it. I’m not sure how we could pass on him if we had the No. 1 pick. The other guys might be more ready right now, but in three years, I think he’s the best player in this class.”
The soon to be lottery pick has a high ceiling with the intangibles he possess. Over the course of the season he has shown great improvement, taking great strides to better himself as a player and it’s quite obvious that he will have a good NBA career barring any injuries. If he wants to become the elite superstar that many believe he can become then he must become dominant and become aggressive with a killer instinct and it may take a few seasons to develop. His maturity is beyond his years as he hasn’t done or said anything negative and seems like a calm person. His dream of playing for the Raptors is unlikely — It should be no surprise if he follows fellow Canadian Anthony Bennett in becoming the No. 1 pick.
NBA legend and Lakers guard Kobe Bryant would love to “mentor” Wiggins if he’s drafted by the Lakers. 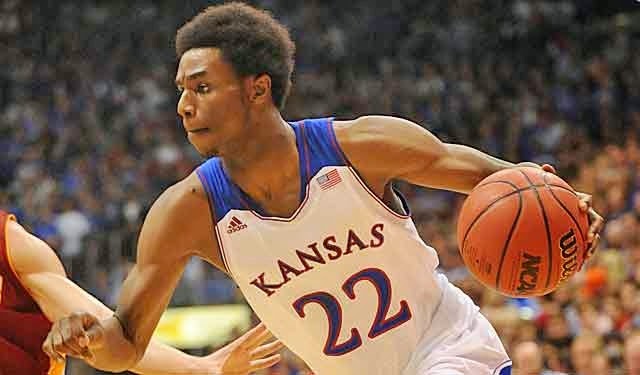