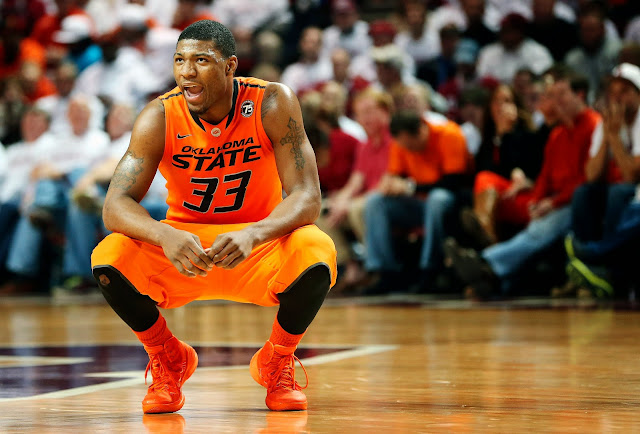 A year makes a huge difference for most people and that has been the case with Marcus Smart. If he had gone to the NBA after the conclusion of his freshmen season then he would’ve most likely been the No. 1 pick or in big consideration to be drafted No. 1. In his freshmen season Smart was named  Consensus second team All-American (2013), Big 12 Conference Player of the Year (2013), USBWA National Freshman of the Year (2013), 2× first team All-Big 12 (2013–2014), Big 12 Freshman of the Year (2013) and Big 12 Player of the Year (2013).  Smart earned those accomplishments by averaging 15.4 points, 5.8 rebounds, 4.2 assists and 3.0 steals with the Oklahoma State Cowboys. The 2013 draft has been known as being lackluster and Smart would easily have been the best player from the draft with having some competition from Michael Carter-Williams.

When Smart announced he was returning to OSU for his sophomore season it was a huge surprise around the basketball community.
“There’s a lot of speculation going. “Smart said when he was defending as to why he returned to school.” I’ve been bashed and criticized that I probably made a mistake of coming back here, the NBA will be there, I should have took it, and this year’s draft class is much weaker than next year’s. But I think I made the right decision. All that was telling me, from those people that said that, is they don’t have confidence in my ability and my game to compete with those players next year. You guys have given me that confidence to do that, so I chose to stay here. I’m aware of how much money I am giving up.”
Fast forward one year and some are questioning if he hurt or help his draft stock after staying an extra year. There is no definite answer to that because a talent like his is Top-10 material and come June he will become one of the first players to shake the NBA’s newly appointed Commissioner Adam Silver’s hand.
Looking at his stats:
Freshmen year: 15.4 points, 5.8 rebounds, 4.2 assists, 3.0 steals, 40% (FG%), 29% (3P%) and  78% (FT%)
Sophomore year: 18.0 points, 5.9 rebounds, 4.8 assists, 2.9 steals, 42% (FG%), 30% (3P%) and 73% (FT%)
While looking at Smart’s stats one can see that nothing drastic changed about his production and with that he has showed minimal improvement over the course of two seasons and NBA GMs may question his work ethic because for a NBA player those shooting percentages are atrocious and his free-throw percentage shouldn’t decrease by 5% but increase by that number.
His sophomore season was filled with lots of twists and turns most notably on February 8th in which he showed an act of immaturity against Texas Tech as he shoved a fan in the stands as the game was coming to conclusion. After the incident Smart told his coach that the fan, Jeff Orr, who is known as a super fan at Texas Tech had called him the N-Word. Orr and many others would go on to deny that happened. Smart would go to serve a 3-game suspension for his actions directed at the fan.
“Unfortunately for Smart, there is going to be a fallout after this,” an NBA executive said. “His reputation has taken a hit. That is all people and the media are going to want to talk about with him before and after the draft. Some teams won’t want to deal with that.”
As the NCAA Tournament began with the Round of 64 Smart’s Cowboys were one of the first teams eliminated as they lost 85-77 to Gonzaga. Smart ended his college career with 23 points, 13 rebounds, 7 assists and 6 steals. In that game he did become the first player in Tournament history to have 20+ points, 10+ rebounds, 5+ assists and 5+ steals in a game.
Smart was brave enough to stay a extra year and can be commended for that because most players are one-and-done as they go to the NBA for financial stability and to further improve their game. Whichever team drafts Smart they will be receiving a mature young man with leadership skills as well as a versatile combo-guard with a tremendous work ethic and isn’t scared of any competition.
Smart needs to improve his mid-range shot when he enters the league as his FG% on 2-point jumpers decreased by 5.6% from 36.3% to 30.7%. It has become quite obvious that all of Smart’s shooting mechanics need to be adjusted.
As noted before, Smart is a combo-guard but mainly played the Point Guard position at OSU. He isn’t the best point guard in the nation or draft as he is mainly a score-first guard and his ball-handling skills aren’t great or horrible but they are decent as he decreased his turnovers from 3.4-2.5 per game this season.
Smart plays NBA-Ready and with a 6’4″, 200-pound frame he clearly has the body to be one of the more physical guards in the league. He’s great on offense and very active on defense but will struggle against faster guards due to his lack of speed. His ability to guard both positions well be a reason why he will be in the NBA but his jumpshot will be a reason why he will struggle and hurt him from becoming a future star.
NBA Comparisons: Tyreke Evans and Baron Davis
Best Fits: Los Angeles Lakers and Orlando Magic
Twitter: @NBAFLASHNEWS
Facebook: NBA Flash News
Instagram: @NBAFLASHNEWS