They say transparency equates to truth……

On this day, the day job had to be shut down for a few minutes, on this day knees buckled and tears flowed and with that said no fucks were or are given. Fore on this day Heat Nation saw Dwyane Wade return to the franchise via a trade with the Cleveland Cavaliers.

Shock and awe can’t explain the mountains of emotions but this had to be done. For the last few months Wade has dropped hints in interviews that he’d love to return to the Heat with the apparent stalemate between he and Heat President Pat Riley being over. Just as recently as last week Wade indicated that he’d like to finish where it all started and he’s seemingly gotten his wish.

Miami Heat Lifer Udonis Haslem had also spoke of a desire to retire alongside of Wade in a Heat uniform. The exceptions of such has grown ten fold and with two time former Wade teammate LeBron James giving his blessing for a deal, Wade is truly back home. 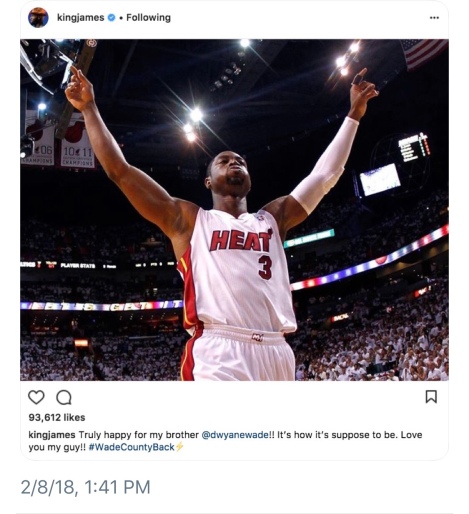 From a basketball stand point despite stellar play at times, the Heat were lacking a definitive go to guy at the end of games that often saw a tired Goran Dragic or an untrustworthy James Johnson attempt the role in the absence of Dion Waiters due to his recent ankle surgery. Wade can still be impactful in spurts and that’s just what the growing, young Heat needs. A veteran who knows his role and who may even come off of the bench in limited minutes but those limited minutes has the potential to be as impactful as even.