The Los Angeles Lakers held their Media Day Monday to begin the 2016-17 NBA season. All players were introduced to the public along with Luke Walton’s full coaching staff. It was clear that the Lakers had made the right choice for their new coach. His presence was felt as a new fresh feeling radiated from the practice facility in El Segundo.

Questions on the many on and off the court issues the Lakers have experienced over the last year had been addressed multiple times throughout the day and team presented the message of “togetherness”.

“I feel like everybody’s buying in and wants to take steps forward in winning and coming together as a team,” D’Angelo Russell said.

Without having coached a single game for the franchise, Walton has seemingly won the team over and instilled a sense of camaraderie. Julius Randle was quoted saying:

“We’ve been up here every day this summer. Already instilled a great vibe, great energy through our team, and we’re excited.”

The players answered questions about their expectations this season and what may be considered success along with questions on their excitement for Coach Walton. 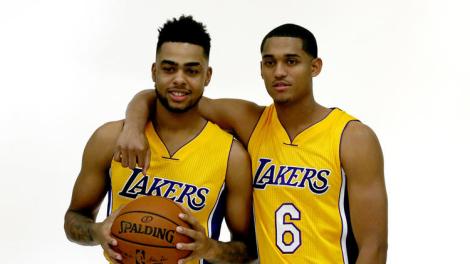 Jordan Clarkson, a player familiar with new expectations, said “He really changed the vibe for us,”. Nick Young, the most controversial player on the team, has caught the new vibe and is focused on being a team player. Young said he took the summer to get his mind right, and focus on his career as a basketball professional saying:

“I don’t want this to be it for me, that’s about all the motivation I need”.

With the new NBA season just weeks away it’s time for the team to create a new chapter to add to the greatest and most storied franchise in NBA history, the Los Angeles Lakers.