Skip to content
The contest was so lop-sided, Derrick Rose got rest in the 4th quarter, as Chicago played one its better games on the road of late.

Nikola Mirotic had it going and hit on 6 of 11 long-distance shots for a team high 26 points and the Bulls coasted to a emphatic road win, 113-86 in Brooklyn.

The Nets had a lot to play for with its playoff hopes in the balance but the Bulls were up to the task, taking a 87-65 lead heading into the 4th quarter. Pau Gasol had another double-double, scoring 22 points and hauling in 11 rebounds. Taj Gibson, filling in for Joakim Noah who took the night off, had another solid effort, scoring 15 points and grabbing 9 boards.  Jimmy Butler scored 17 points with an excellent floor game.

The Bulls had 26 assists and just 7 turnovers. If that trend continues, they will be tough to play in the first-round of the playoffs.

The win clinched home-court in the first-round of the upcoming playoffs. With Toronto idle, the Bulls took a slim half-game lead for third place in the Eastern Conference.

After the game, Coach Tom Thibodeau was pleased with the Bulls effort.  “It’s an improvement,” said the head coach.

Rose played 23+ minutes and scored 13 points with 7 assists. He also hit two treys for the night. But it was the rookie Mirotic who had the hot-hand, finding the range on a series of floating three-point attempts.

The Nets were never a threat in this game — the Bulls made sure of that with a 30-15 third quarter. 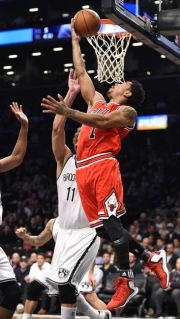