Skip to content
This was a strange game. The Chicago Bulls, who won the game, only shot 35% from the floor. It is practically unheard of for a winning team to shoot so poorly. However, the Milwaukee Bucks had a worse shooting night, managing to hit 33.7% from the field.

Milwaukee was playing without former starting point guard Brandon Knight who was the leading scorer on the team. But he was traded for Michael Carter Williams the talented point guard who who has been sidelined due to a sore toe.  The plan is to get him back on the court when he ready which could be later this week.

The Bulls had a 15 point first half lead which it held for most of the game. Chicago won 87-71.
The Bucks were so offensively challenged that it had 60 points mid-way through the fourth quarter.
Credit the Bulls defense and the inept shooting of the Bucks.

The Bulls won because they had a 62-41 advantage on the boards. At one point in the first half, Chicago had 11 offensive boards to just 1 for Milwaukee.  Chicago finished with 17 for the game as opposed to 12 for the Bucks. 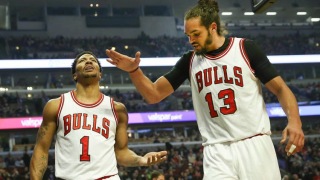 Derrick Rose had a terrible shooting night going 1 for 13, and 5 of 6 for made FT’s for 8 points. Yet the Bulls received aid because Tony Snell shot better, going 7 for 11 and had 18 of his 20 points in the first half, 12 in the second quarter. Snell converted 4 three-point shoots.  Pau Gasol had 15 points and 10 boards. Joakim Noah, on his Bobble-head night, earned 16 rebounds and scored 8 points. Jimmy Butler scored 11 points and grabbed 9 boards. The revelation was the play of Nikola Mirotic who had a double-double scoring 16 points and hauling in a career high 14 rebounds.

Milwaukee was playing without Jarbari Parker, out for the year with knee surgery and they are changing the chemistry of their with newcomer G Michael Carter Williams.  Khris Middleton led the Bucks with 17 points. Ersan Ilyasova had a double-double with 15 points and 11 rebounds.

Rose played 32 minutes in  hopes of finding his shot, but it had left him for the night. Luckily, other Bulls, like Snell and Mirotic picked him up.  Noah played an active game and that helped.

In the midst of a 7 game home stand, the Bulls are 2-0 and hope to climb in the standings.