Skip to content
Saturday night the Chicago Bulls needed everyone to earn the win.  Taj Gibson and Aaron Brooks of the second unit came up big in the early fourth quarter to take the lead against the Phoenix Suns. 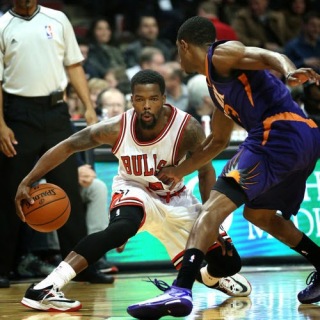 Then Derrick Rose made some of his patented driving layups to cement a hard fought 112-107 win against the re-vamped Suns. Brandon Knight, the quick guard who was recently acquired from Milwaukee, makes Phoenix a faster team, that likes to pressure on offense. They are quick and athletic and can get up the court and spread the ball out or drive to the hoop in seconds.

It almost worked against the Bulls, but Chicago had just enough in the fourth quarter. The Bulls ( 25-11) now lead Cleveland by a game in the Central Division. The win ups their home court record to 16-11. The Bulls outscored the Suns 31-24, in the final quarter and that was the difference.

Chicago played better than their debacle recently in Detroit. They showed much more ball movement, improved shooting, and greater focus. Pau Gasol had another double-double, 22 points and 14 rebounds to lead Chicago. Jimmy Butler had 19 points. Rose had 16 points, with some key points in the fourth quarter. Mike Dunleavy had 15 points in his best game since returning to the starting lineup. Taj Gibson played another strong game off the bench, going for 10 points and 8 rebounds.  Joakim Noah did the little things to help the team win, with 12 rebounds, 8 assists and 3 points. Actually, his 8 assists were a team high.

Phoenix had 6 players score in double-figures. Forward P.J. Tucker had a team high 20 points. Marcus Morris, one of the Morris twins, had 17 points. Eric Bledsoe almost had a triple-double with 13 points, 7 rebounds, and 8 assists. Phoenix lost despite shooting almost 53% from the floor.

However, the Bulls displayed greater resolve. They played like they wanted this win.

Coach Tom Thibodeau spoke to the media on the revelation that Derrick Rose missed a team practice on Wednesday before the Pistons game.

“Sometimes things like that do happen and you have to deal with it as best you can,” said Thibodeau. The Bulls coach said handling this would be an “internal matter.”