Skip to content
The Chicago Bulls were coolly dispatched last night at the Verizon Center.  Chicago needed to find its mojo again after gettng lambasted by Utah a few nights back. 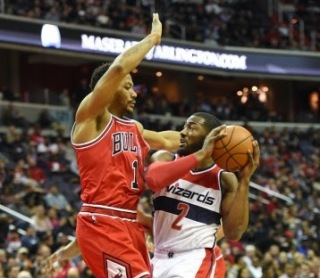 John Wall (16 points, 12 boards) and his team weren’t in a cooperative frame of mind, and the Wizards won convincingly, 102-86.  The Wizards (25-11) are one of the top teams in the Eastern Conference and they played like it. This was not a good  team to play to “get back on track” if you rooted for Chicago.

The Wizards have an extremely dangerous backcourt in Wall and Bradley Beal, a three point shooter, who has the touch of a Reggie Miller. When Beal is on, forget it.  He made a late trey to put the game away for Washington, as “cool as the other side of the pillow”, as the late sports anchor Stuart Scott liked to say.

The positive news for Chicago was that Derrick Rose had a good night, scoring 19 points, and was more aggressive on the court.  He made a beautiful move inside to beat a big man for a layup.  That move indicated that he’s OK, he just might be a shooting slump. He is only hitting around 24% in his last 6 games.

In this game, the Wizards took a commanding 30-13 lead in the first quarter and the Bulls spent the right of the game trying to catch up. It’s hard to catch up against a good team, especially with Paul Pierce playing.

Pierce is a warrior and won’t back down from anyone. He gives the younger players a strong presence on the court, to do their thing.  Tonight, those guys did. Washington hit 47.7% in field goals and 8-15 in long ball attempts. Marcin Gortat continues to impress with 21 points and 13 rebounds. He is an immovable force close to the basket.  Every time the Bulls got within 8 points in the second half, Washington hit a three pointer to make it an 11 point lead.

The Bulls were led by Rose with 19 points. Pau Gasol had a “quiet” double-double of 12 points and 13 rebounds. Aaron Brooks had 16 points. Mike Dunleavy missed the game with an ankle injury.

Prior to the Jazz loss, the Bulls were a hot team, winning 13 of 15 games. Now, they’ve lost two in a row, first time since early in the season.  There is a time and place for everything.