Skip to content
The Oklahoma City Thunder (17-17) visit the Golden State Warriors (26-5) tonight in a match up of Western Conference foes. Looking for their third win in a row, this will the the Thunder’s first opportunity to break the .500 mark this season, albeit a tough one. The Warriors won their previous match up 114-109, and have defeated the Thunder twice this season.

2014 NBA MVP Kevin Durant has been on a quick tear since returning to the lineup two games ago; leading the Thunder to back-to-back wins while scoring 44 points versus the Phoenix Suns and 34 points against the Washington Wizards. Look for Durant to continue much of the same tonight, as he scored an easy first half 30 points on the Warriors last time in OKC. KD left that game during the final play of the first half, ending up with a sprained ankle that kept him sidelined six games.
There are two key things to watch in this game:
and
It is very well possible that this game quickly turns into a Wild West Shootout. This game can be explained with a ‘simple to understand, but terribly difficult to execute’ formula: Which team can stop the other team’s superstars? Look to see both teams come out fast and spicy as there is always a lot on the line in the NBA Western Conference.
2015 Forecast
Late 2014 ended with much speculation that 2 Time Champion and 4 Time MVP LeBron James of the Cleveland Cavaliers has maybe lost a step since his Miami days, which seem light years away already. The Cavaliers have had a rocky start, coupled with a struggling LeBron James who is currently out at least 2 weeks with back and knee injuries. Does LeBron still sit on a throne atop the NBA as it’s overall best player? Many headlines currently place Pelican’s center Anthony Davis as the unanimous pick-for-the-future.

But how about right now?

Seems like the perfect timing for Kevin Durant, a fresh 2015 start after an injury plagued beginning of the season. Durant’s has very quietly racked up a solid stat line of 25.5 PPG, on 55% shooting and 45% from 3, 5.7 RPG, 3.7 APG, 0.9 BPG while knocking down 89% of his FT’s.  KD has 48 games left in the season not only to kickstart his MVP campaign, but also officially declare himself…
Yes I dare say it,
The best current basketball player in the world. 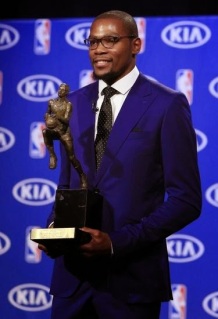