Skip to content
Are the Cleveland Cavaliers tuning out rookie head coach David Blatt?  The last 24 hours have delivered every angle expected from the franchise who is grossly underachieving.  The irony is that in sports we’ve seen this time and time again; nothing here is surprising, just the same retreaded news over and over again.  The Blame Game leads to the sacrificial lamb which leads to the chosen one and after all is said and done the result will remain the same. 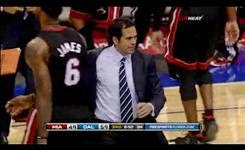 The issue at hand goes back to hubris, the hubris of one that thinks he can control all around him and to an extent he can but in this world the Basketball Gods always have the final say.  The act of discontent was tried once before, the scene was much different but the game was played the same.  During a time that the Miami Heat were 9-8 in LeBron James’ first season with the franchise, the King’s camp let it be known that players were questioning whether or not Erik Spoelstra was the right coach for the team.

Sources say the players believe he is not letting them be themselves, that they are questioning his offensive strategies, and that they think he is panicking because he fears losing his job.

“He’s jumping on them,” one source said. “If anything, he’s been too tough on them. Everybody knows LeBron is playful and likes to joke around, but Spoelstra told him in front of the whole team that he has to get more serious. The players couldn’t believe it. They feel like Spoelstra’s not letting them be themselves.”

We are all aware of Chris Broussard’s sources…..puppets are willing and eager in this business….
Luckily Spoelstra was never fired based on the antics of one’s camp and the Miami Heat would go on to participate in four consecutive NBA Finals, winning two NBA Championships along the way.
Rumors of discontent between the players of the Cleveland Cavaliers and their coach (Blatt) have rumbling for weeks but exploded recently due to ESPN’s Brian Windhorst…..the puppet masters were at it again and the puppet, dare I say was willing and eager….
Sources told ESPN.com that there is rising concern in team circles about the level of response that Blatt is getting on the floor, with Blatt himself acknowledging that the Cavaliers “lost our energy and we lost our competitiveness”
The sacrificial lamb had been chosen and to his heir-apparent, Tyrone Lue
“Whispers about the lack of attention that various Cavs players are paying to Blatt during some timeout huddles, as well as their apparent preference to communicate with Cavs assistant and former NBA player Tyronn Lue, have been in circulation for weeks.”
All of the pieces to the puzzle are in place.  The Blame Game which led to the sacrificial lamb and now the Chosen One has been selected and the genesis of the game has been cast asunder:
“I think my relationship with the coach continues to get better and better every day,”  LeBron James said Monday “This is two months of us being together. I don’t know him fully. He doesn’t know me fully. He doesn’t know any of the guys fully and that’s to be expected. It’s our first year together. But he has our attention.”
Were we all supposed to forget that we’ve seen this story before.  At 18-12 the Cavaliers are currently 5th in the NBA’s Eastern Conference, were they out west, they’d be fighting for the final playoff spots. 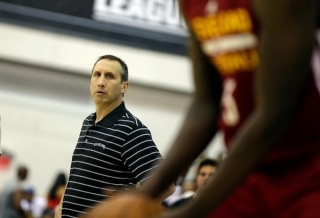 The NBA season is still early as we’re not even at the halfway point yet.  It is said that time heals all wounds and the Cavaliers have been scarred thus far mentally and physically.  Blatt was never supposed to be the guy for the team as currently constructed but would a potential coaching change really deter LeBron James’ “Chill Mode” or Kevin Love’s constant overrating being realized.  It definitely won’t bring Anderson Varejao back.
Don’t panic now Cleveland for this is the roster that you chose, the coach that you picked and the King that you begged to come back.  Stay the course because a move now would scream desperation and the admittance of a mistake.  It’s time to stop playing the Blame Game and try accountability.  Be the change that you want to see.  Instead of being the broken record of “We’re not a very good team” try giving 100% versus the 70% that you’re giving right now.  Hubris can be blinding at times…..
“Ignorance and power and pride are a deadly mixture, you know.”
― Robert Fulghum