Skip to content
Derrick Rose was ill and did not play. It didn’t seem to matter as Jimmy Butler scored a career high 35 points to lead the Bulls over the visiting New York Knicks, 103-97.

The Knicks played without their leading scorer, Carmelo Anthony, who was resting a sore left knee.  The Knicks gave a good showing and were never out of the game until the final minutes.

Taj Gibson did not play for Chicago due to a sore ankle. Aaron Brooks came off the bench and had a solid game, scoring 18 points. And, Nikola Mirotic added 13 points.

His coach, Tom Thibodeau has said he is playing like an All-Star. After the game Pau Gasol lauded Butler’s “aggressiveness.”  When Butler saw a shot, he took it.  He has stepped up his game and may well end up an All-Star, and it would be well deserved.

Credit the Knicks for putting up a tough fight without their star, Carmelo Anthony. Tim Hardaway, Jr. had 23 points and Amar’e Stoudamire added 16 points and played well at center. 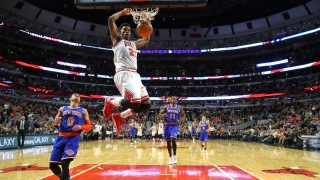