Skip to content
It’s early but one wonders about Derrick Rose holding up in an 82 game season.  Rose did not play against the 76ers on Friday night but the Bulls (5-1)  prevailed due to an outstanding game from Mike Dunleavy who scored 27 points, 12 in the third quarter, when the Bulls took control of the game.

Chicago had 35 points in the third and took a 16 point second half lead but saw it disappear to a pesky Philly team. Tony Wroten, Guard, scored 31 points, and forward Hollis Thompson had 21 as the 76’ers closed the gap, but the Bulls held on for the fourth road win of the season.

Chicago has everyone back except Rose.  The dilemma is letting his ankles heal properly, while Rose wants to play.  Upper management sees too great a risk in having Rose play through sprained ankles.

The Bulls are winding up a 4 games in 5 nights sequence. Next up is Boston and Rose’s status is currently unknown. 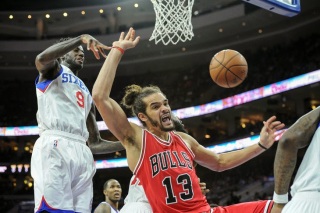