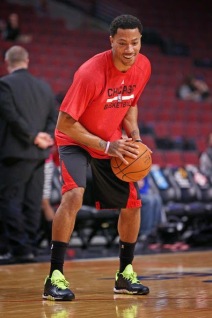 The injury watch is on again for guard Derrick Rose.  He is expected to start against the Orlando Magic at the United Center. Rose was scratched just before the previous game against the Minnesota Timberwolves.  Shooting guard Jimmy Butler returned after a brief absence due to a sprained thumb and played a large role in Chicago’s road win in Minnesota.

Butler scored 24 points, including two big free-throws with .02 ticks on the clock.  His first attempt was good and tied the game.  The next free-throw was also good and gave the Bulls a one point lead, 106-105.

That was the final score and Chicago escaped with the “W.”

Taj Gibson, out with an ankle injury is also expected to play vs. Orlando on Tuesday.  Gibson has proved to be an important player for the Bulls.  He does so many things around the basket. His offensive game has improved a lot, so he is a factor in the low post.

It is not known how much Rose will play, but his presence on the court will give a lift to the team.