The pre-season is officially over.

Someone should have told the New York Knicks that on Wednesday night as they tried out their new triangle offense with new head coach Derek Fisher at the sold out Madison Square Garden.  Even Woody Allen, a long-time Knicks fan, was on the scene.

The New York Mojo lasted maybe 5 minutes once the game tipped off.  Then Chicago applied pressure to the Knicks running the triangle and the offense fell apart.  The Bulls took a 24-20 lead at the end of the first quarter and essentially, the game was over.  The Bulls stopped the Knicks dead in their tracks, and went on to build a comfortable 53-43 half-time lead. This was a game where Jimmy Butler, the Bulls highly regarded swingman, sat out the game due to a sprained left thumb.  Jose Calderon, the Knicks starting point guard, was late scratch.

Shane Larkin, filled in for Calderon, and at times looked over-matched.  The Knicks troubles started when Chicago pressured the Knicks as it started to run it’s offense.
“(They were) pressuring us a little bit,” said Larkin. “It’s a learning experience.” “We haven’t seen that kind of pressure yet.”
Expect to see it more.

Derrick Rose made his debut and scored 13 points.  He looked good at times, and other moments, rusty.

Pau Gasol, the new acquistion from Los Angeles,  had a great night, scoring 21 points and had 11 rebounds. Taj Gibson scored 22 points to lead Chicago, and made his presence felt as Chicago took a 44-32 lead in the 2nd quarter adding 11 points in 11 minutes. Rookie Doug McDermott saw action and scored 12 points in his NBA debut.

Chicago took command of the game leading by as much as 35 points in the second half, and silenced the Knicks’ fans. Clearly, the infusion of new talent was a spark for Chicago, and this was missing Butler, a key player on perimeter defense. Butler will be back, And, the Bulls will continue to play it’s new look roster.

Gasol looked around at the team, and made an observation on how this will effect Rose coming back.
“I thnk it’s a lot of pressure off his shoulders,” Gasol said. “Because we have I think a variety of weapons,
so he doesn’t have that pressure to score and force things.”

A great way to start the season. 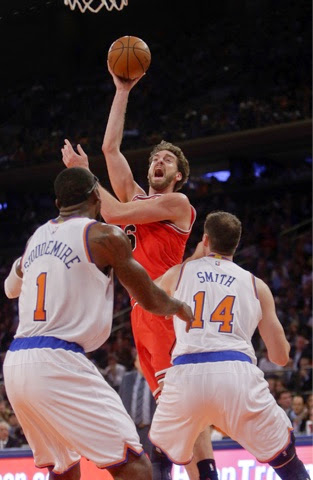